April 24-25th, 2015
Newberg, OR - The Wildcats wrapped up their regular season with a 4th place finish for the lady 'Cats and a 7th place finish for the men. Jake Mihelich won male track athlete of the meet while winning in his signature event, the 400m, finishing runner up in the 200m, and also helped both relays finish 3rd.

April 18th, 2015
Portland, OR - In the last meet before the NWC Championship meet, the Wildcat Women won the Lewis and Clark Invitational and the Men finished runner up. Winning five events, the 'Cats added seven more qualifying marks and had 52 top eight finishers. The Wildcats now total 75 qualifying marks.

April 11th, 2015
Forest Grove, OR - The Wildcats had 56 Top eight finishers and added 12 more qualifying marks in a conference only meet hosted by Pacific. Jake Mihelich swept his events yet again with first place finishes in the 200m and the 400m, senior Brooke Niemann won the 3,000m steeple chase, and sophomore Madison Gladding won the 400m hurdles.

April 4th, 2015
McMinnville, OR - The Wildcats won 5 events and Kennedy Johnson moved to the #7 spot on the Linfield Top 10 List for Triple Jump and Joanna Galli is now #9 for Pole Vault. The 'Cats had 34 top 8 finishers and added 11 more qualifying marks. Ellie Schmidt won the 100m and was 3rd in the 200m. Discus thrower Tim Pang finished runner up in is event.

March 20-21st, 2015
Portland, OR - The Wildcat women won the Lewis and Clark Spring Break Open the men finished 2nd. Jake Mihelich ran the fastest 400 time since 2013 in DIII which earned him the national honor of DIII track athlete of the week. The Wildcats totaled 5 event wins include Ellie Schmidt in the 100m and 200m, Mihelich in the 400, Kennedy Johnson in triple jump, and the men's 4X400 relay.

March 14th, 2015
Gresham, OR - Rain did not stop the Wildcats from adding 9 new qualifying marks and 28 top 8 finishers. Highlights from the meet including first place finishes from Brooke Niemann in the steeplechase and the women's 4X100 team, second place finishes from Kate Shear in the javelin, Steven Holland in high jump, and the men's 4X100 team. Olivia Bannerot is now #6 for Long Jump in Linfield history.

March 6th-7th, 2015
McMinnville, OR - An unusually warn and sunny Erik Anderson Memorial Icebreaker brought 16 qualifying marks on the women's side and 15 on the men's, as the Linfield Wildcats had a great start to their 2015 outdoor season. Highlights from the meet include Jake Mihelich's performances in the 200m and 400m races, putting him at the #4 and #2 spots on the Top 10 List. Kennedy Johnson now ranks #9 for Triple Jump all time

The Linfield track and field team is heading in the right direction. 47 women and 43 men make up this year's squad, 8 and 9 more respectively than last year's team. Last year's trio of NCAA national champion qualifiers are back hoping to lead the predominately young team forward in the NWC standings this year. 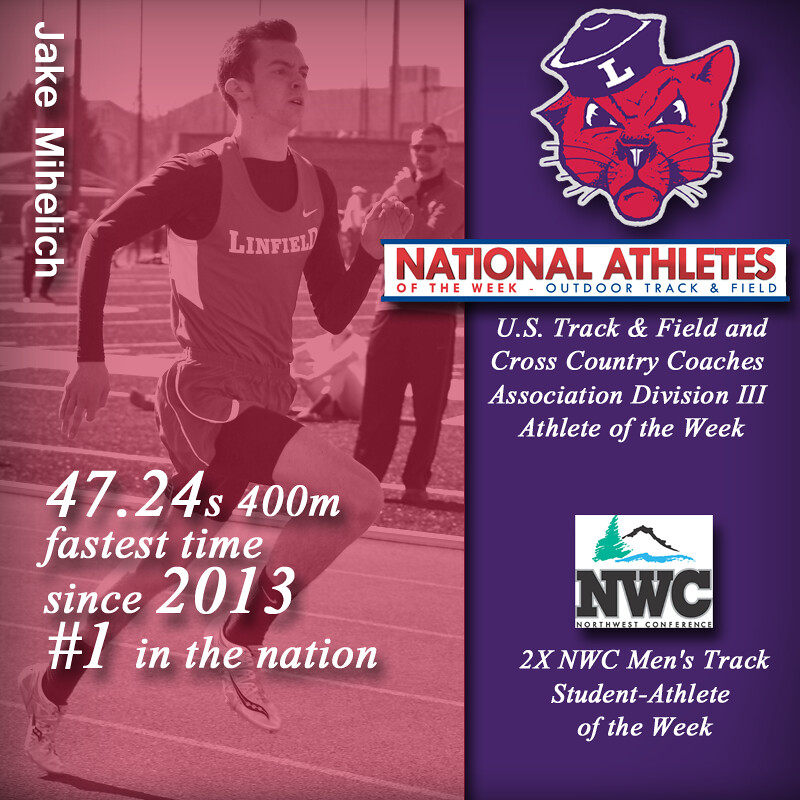 Great Job Dal! 8th in the nation and All-American! pic.twitter.com/3YylZRwpBv